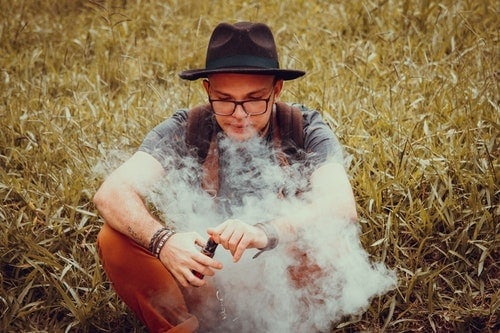 In recent years, vaping or e-cigarettes have become increasingly popular, particularly among young adults and even teens. They’re often seen as a ‘healthier’ version of smoking cigarettes. But as more studies come out, we’re finding out more and more ways vaping can be detrimental to overall health. The concerns don’t end there. There are also oral health side effects of vaping that your dentist in Waco wants you to be aware of.

Vaping bypasses traditional means of smoking by eliminating the tobacco and substituting it for flavored or unflavored liquid. But that doesn’t mean they’re without dangerous ingredients that harm both oral and overall health.

Propylene glycol is one of the most common ingredients in vaping liquid, and it’s also one of the things that concerns your dentist in Waco. This liquid, when broken down in the mouth, creates various byproducts that are all toxic to tooth enamel and the soft tissues in the mouth. Essentially, it can wear down enamel, weaken teeth, and leave them at risk for decay. That’s not all. Propylene glycol also dries out the mouth and limits saliva production. When this happens, some side effects may include dry mouth, bad breath, and an increased risk for gum disease and cavities.

Another dangerous liquid found in e-cigarettes is vegetable glycerin, which gives e-liquid a sweet flavor. Vegetable glycerin is found in some foods we eat and acts as a sweetener there too. One thing about this product that pleases your dentist in Waco is that it’s not believed to cause cavities. But, when vegetable glycerin is mixed with flavoring, which many e-liquids do, the results are a bit scary. According to one study, flavored e-liquids contributed to a 27% decrease in enamel hardness. That, paired with the fact that the thickness of the liquid in the mouth makes more bad bacteria stick to teeth and teeth crevices, can result in decay.

Just as with traditional cigarettes, e-cigarettes are addictive thanks to the nicotine content. Nicotine itself brings a whole host of oral health concerns, one being the effect it has on gum tissue. Studies show nicotine can restrict blood flow to the gums and affect immune cell functions, all of which can put someone in danger of developing gum disease.

Even though e-cigarettes don’t require a flame to use, they can still be dangerous. The lithium batteries that power vape pens have a tendency to overheat, and there have been reports of pens exploding. These explosions can cause serious injuries to the mouth and face, and while rare, can even result in fatal damage.

Many people use vaping as a way to stop smoking traditional tobacco products as it’s often seen as a better alternative. However, vaping doesn’t come with its risks. Besides the oral health side effects listed, vaping has been linked to:

It’s never too late to quit smoking traditional cigarettes or e-cigarettes. The American Lung Association has some great advice and is a good place to start.

Welcoming patients from Woodway, Waco, and other nearby areas.